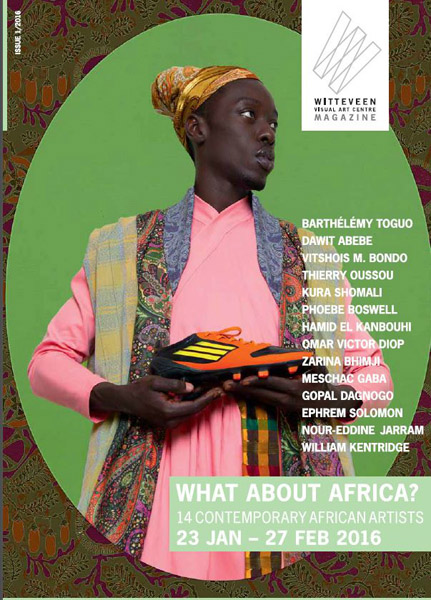 Hidden in a maze of little streets in the Jordaan neighbourhood of Amsterdam you will find the Witteveen Visual Art Centre, which is located in the narrow Konijnenstraat behind an inconspicuous door. When you walk inside you find yourself in a surprisingly large space, standing face-to-face with a new collection of works by contemporary African Masters. 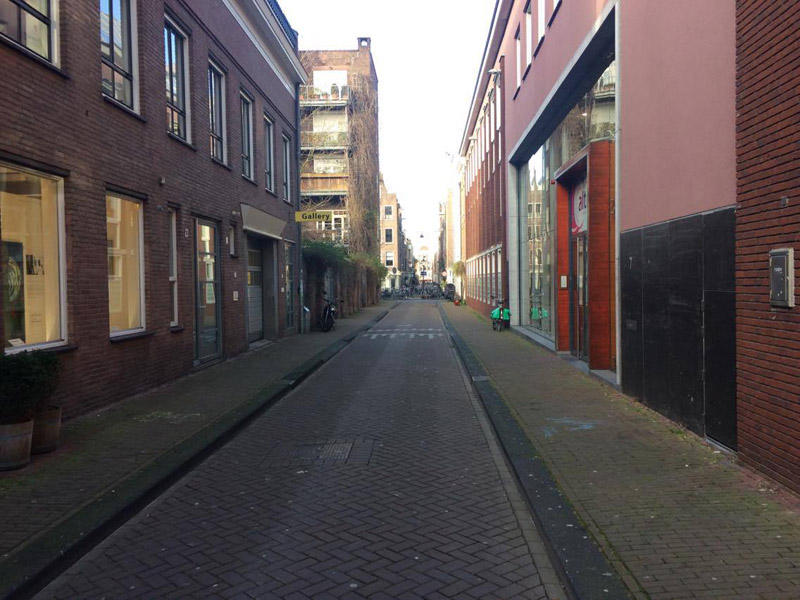 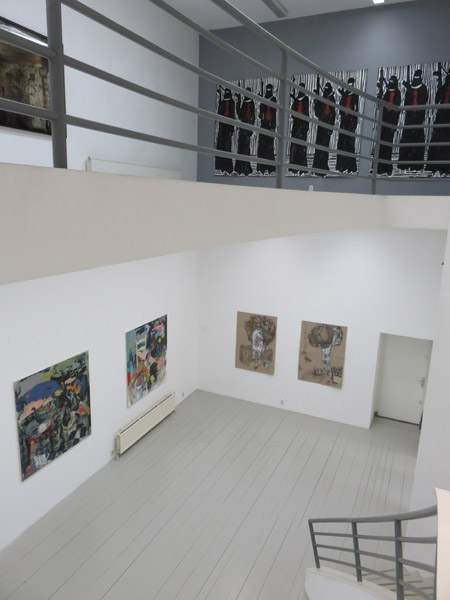 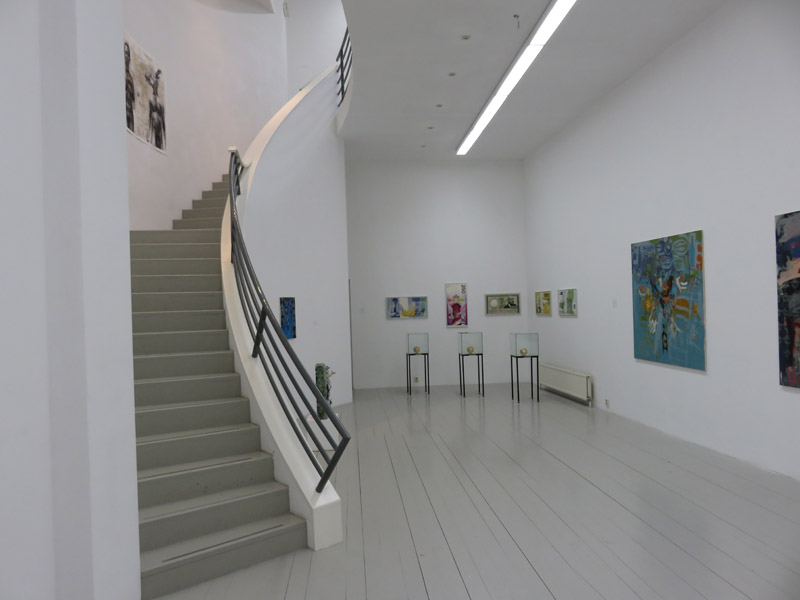 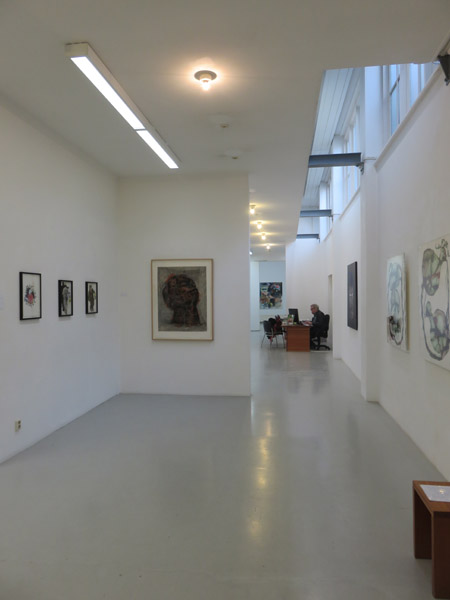 Witteveen Visual Art Centre is currently exhibiting work by 14 contemporary African artists, selected by the art historian Rob Perree. He has a passionate desire to show the high quality of work produced both on the continent and in the diaspora.

“Little attention is paid to contemporary African artists in The Netherlands. In Dutch museums hardly anything happens that’s off the beaten path. That’s such a shame. I feel frustrated if art, which is very good, is simply not shown. I want to stand up for the underdog.” 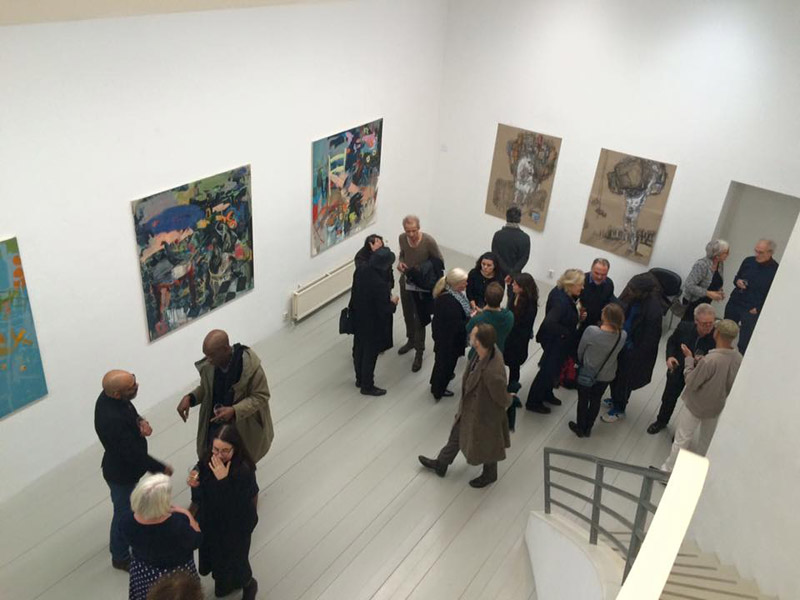 His selection of artists is based on personal affinity and intuition. “I have followed these artists for years and have selected works based on quality not topic, geography or gender. But I did want to show a lot of different media.” In addition to various media he also wants to show a mixture of emerging and established artists of different ages. “Thierry Oussou and Gopal Dagnogo are for example artists who deserve more attention. Both are really courageous and their work is unbridled and free. Oussou chooses a very large format and it might look like he’s just playing about but… he really understands what the power of an image can be. And Dagnogo works quickly and uses pink, a very daring colour. On top of that he uses various symbols that refer to Africa but at the same time it appears to be abstract expressionism. The works are fearless. ” 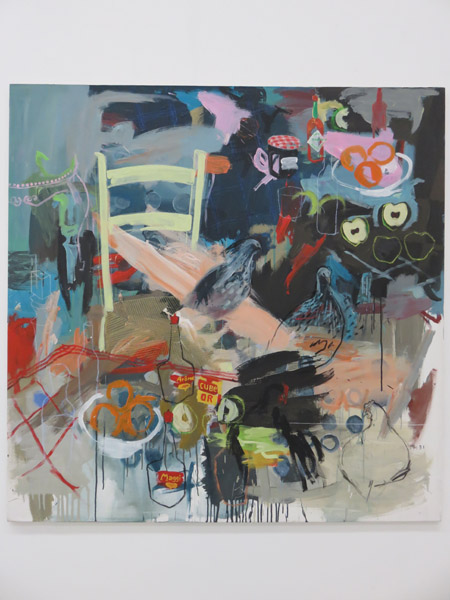 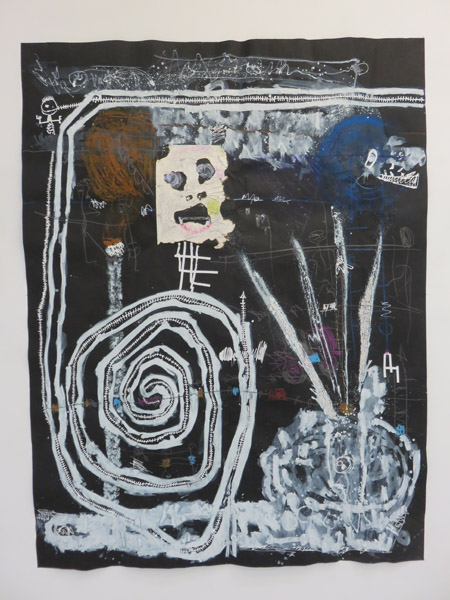 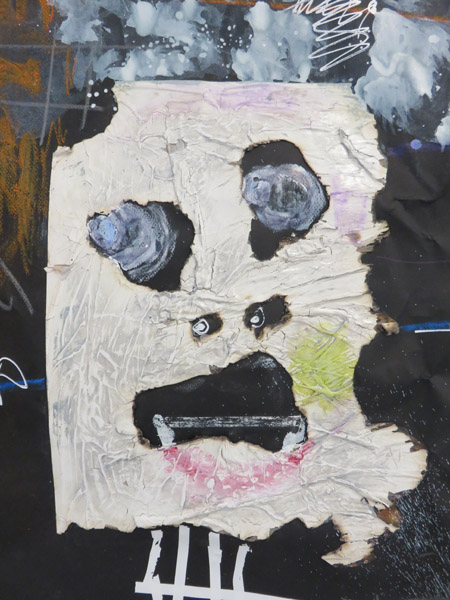 The Poetry of our Time

Thierry Oussou, who comes from Benin and is currently artist-in-residence at the Rijks Academy in Amsterdam, works with heavy paper or newspapers and acrylic paint and glues layers of paper on top of each other to form a relief. Oussou explains: “In newspapers you’ll find the history of a particular day. History is made up of layers, as humans are too.” He sees a link between this accumulation of paper throughout our lives and the inevitability, that rich or poor, we will all encounter suffering.

“Suffering feels like coals that burn on your skin. That’s what I do with paper. I paste multiple layers of different types of paper onto each other and then I burn holes in them with coals. Daily life is Oussou’s main source of inspiration. Regarding his masks he says: “Everyone can hide behind a mask. Each mask is a person, an individual composed of several layers.” Oussou calls this series ‘The Poetry of our Time’ in which he wants to invite reflection about contemporary life.

Barthélémy Toguo ‘The Quintessence of Life’ 2006

More established names in the art world are also included in the exhibition. Names like the Cameroonian Barthélémy Toguo, the Beninese Meshac Gaba and the South African William Kentridge. There are some watercolours by Toguo although he also works with other media. Toguo’s desire is to inspire young people to become involved in the arts. On the whole he thinks that people take art too seriously and he makes a plea for more levity in the art world and the chance to play with reality. 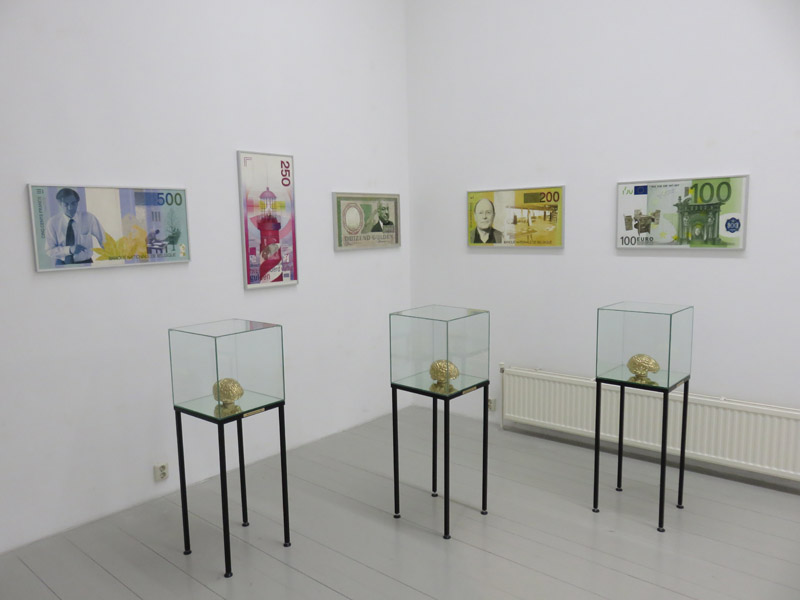 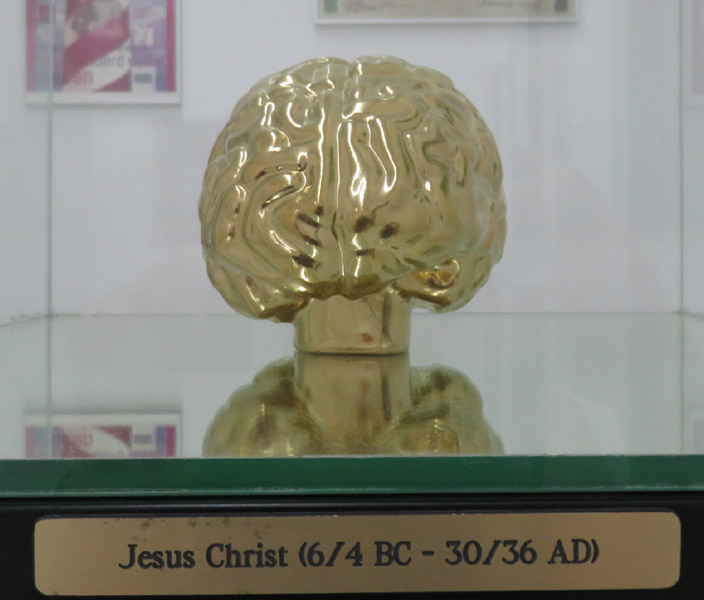 Gaba’s work is about memory, history and recognition. His work shows a number of aquariums which each contain a beautiful brain lying on a mirror. These represent influential people who have made an impression on the artist’s life in cultural, humanistic, scientific, philosophical, social, religious and political terms.

According to Perree none of the works need to have something typically ‘African’. “I don’t even know what that ‘Africaness’ would be. But the common denominator is that it is all engaged art. Social engagement really appeals to me. A particular urgency radiates from the works, which is almost completely missing from contemporary Dutch art. African artists seem to automatically work from a certain state of urgency.”

The works of the Moroccan Hamid El Kanbouhi and two Ethiopian artists Dawit Abebe and Ephrem Solomon are good examples of such social awareness. 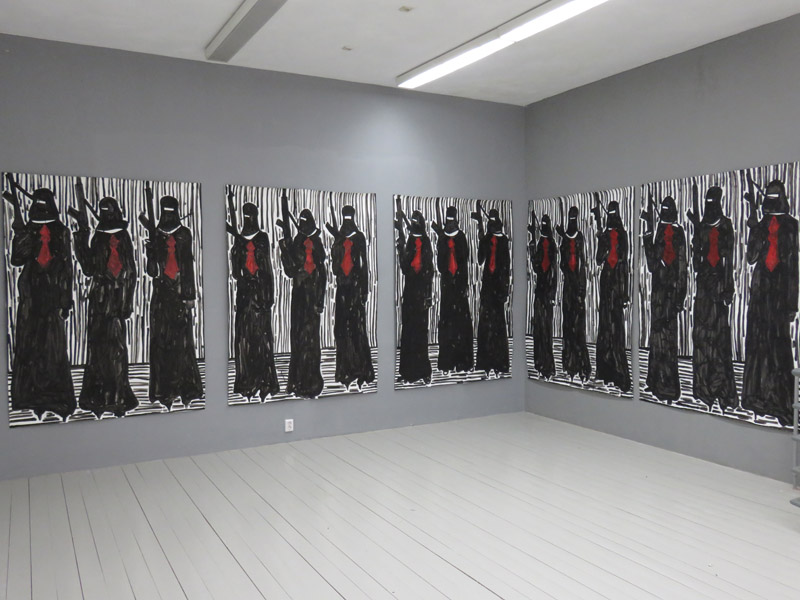 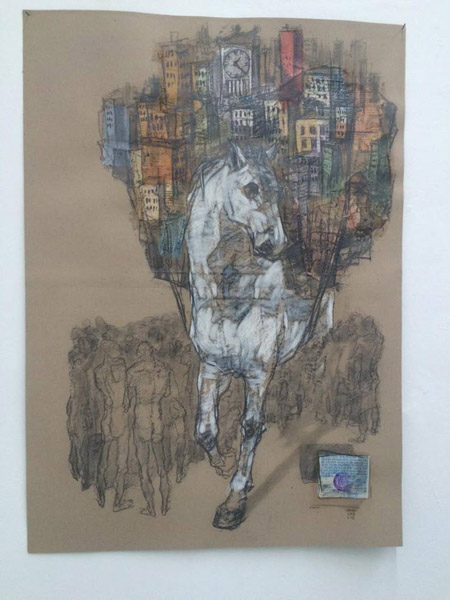 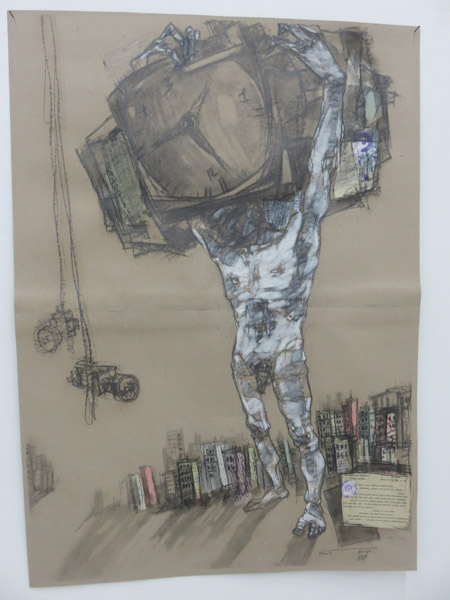 Dawit Abebe and Ephrem Solomon, both from Ethiopia, want to stimulate their viewers to reflect on identity and the relationship of people with respect to (social) media, history and authority.  Abebe explores the importance and powers of history that he feels people no longer consider to be important. He fears that people are brainwashed by the media and riveted by the volatile nature of social media.

“The younger generation forgets its own culture, history and social life, and that is very bad … the loss of face-to-face contact has already taken place in Europe but also seems to be happening in Africa … It is a sad development because we have a rich culture of community and solidarity, where people come together and discuss and laugh. How can someone fall in love when they have never met in real life? And why are people so obsessed with cameras? ” 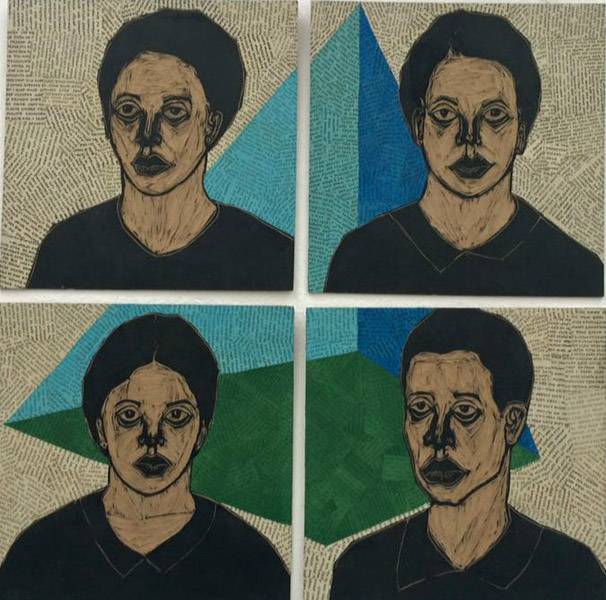 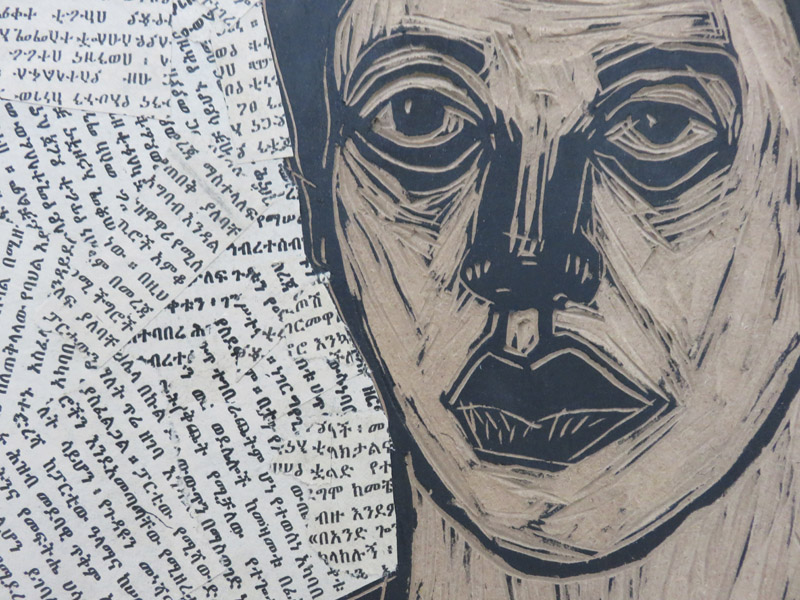 In his woodcuts Solomon explores the power authority holds over individuals. That this relationship is disrupted in Ethiopia is an understatement according to Solomon and the figures he depicts are not happy. “Nowadays I make a lot of portraits, sad and neutral faces but also deformed faces, because there is also no perfection in the real world.”

Nevertheless, one of his favourite places to observe people is around the stadium in Addis Ababa. It is a place where people gather, laugh, talk and play games. It’s almost like a gambling hall where people speak freely and live in the present. Solomon focuses on the identity of Africans and Africa as a continent. How does identity relate to the local, national and international contexts? What is the role of people and their leaders in society? These are all questions that inspire him in his work. 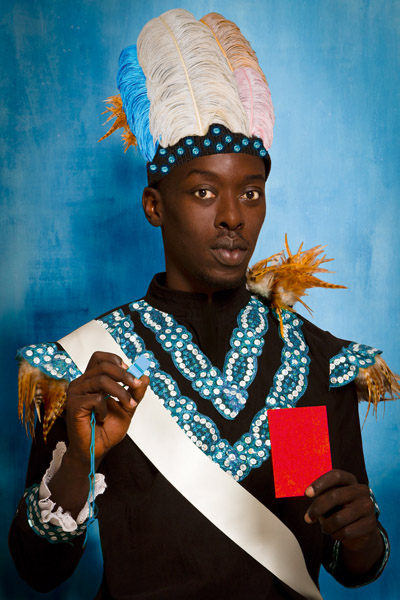 At first glance Victor Omar Diop’s work seems to be a purely aesthetic image but on closer inspection it also hides deeper layers of meaning. Perree explains: “I think it’s nice to be seduced by an artwork, but Diop is more than that! He refers to people from history which is visible as they are wearing strange costumes. But then Diop adds an element of parody by adding sports articles in his portraits. The combination of blackness and sport is always acceptable. He gives himself a red card; in other words there is humour and a seduction mechanism in his work but also depth of meaning.” 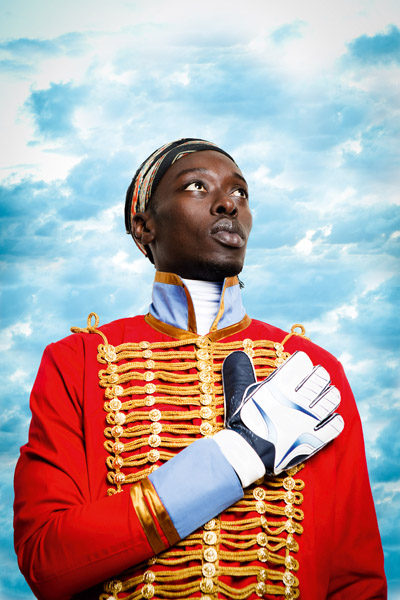 Perree sees the exhibition as a test case in Amsterdam. He sighs: “I wonder if the Dutch media is going to write about the exhibition and if more African artists will be included in the contemporary art scene in the Netherlands.” He hopes that visitors will begin to understand other cultures better through their visual art.

“If you want people to look across borders and not be confined to their familiar environment, you have to confront them with things that they may not understand at first. I strongly believe that you have to bring people in contact with art. Writing on its own is not enough. ”

This article cannot pretend to provide the same experience as being confronted with the art works in real life. Neither does it provide the possibility to discuss all fourteen artists, which means it’s better to visit the gallery yourself!

Perree hopes to arouse curiosity with his exhibition and that visitors will be enthused and want to learn more about the art, artists and their context. ‘What About Africa? 14 contemporary African artists’ can be seen until February 27th 2016 in Witteveen Visual Art Center Konijnenstraat 16A Amsterdam. 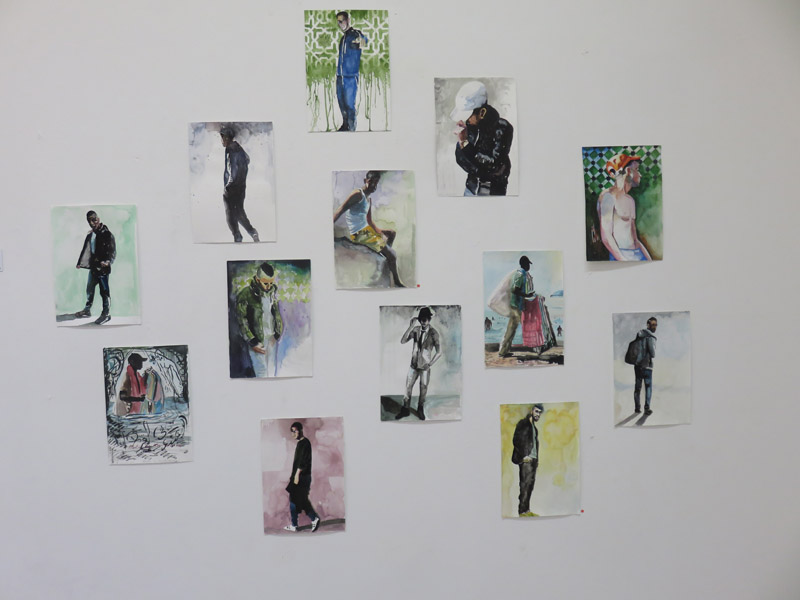 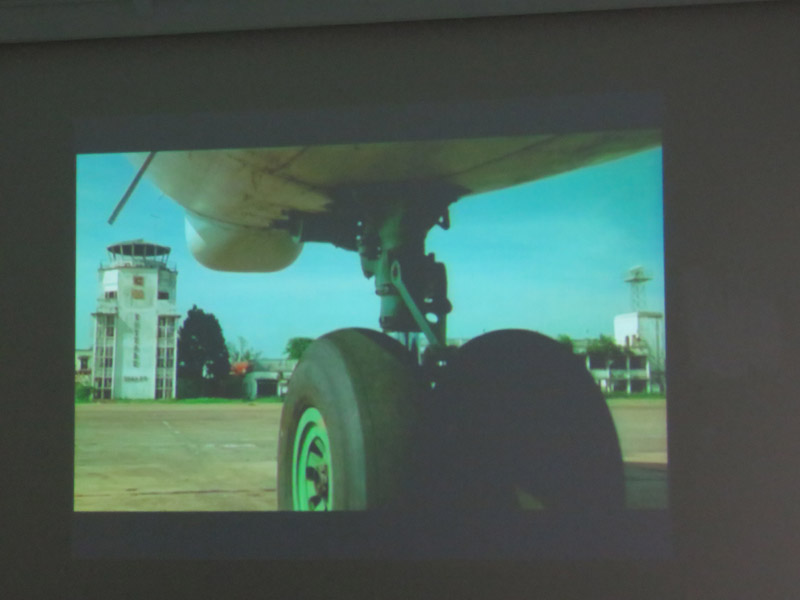 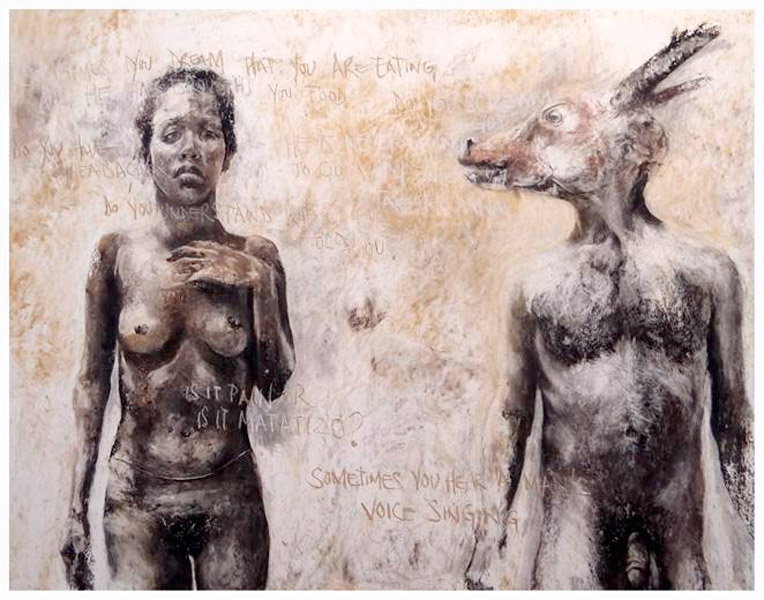